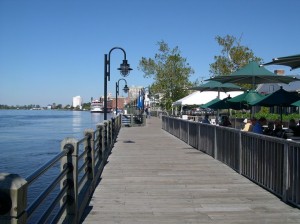 Wilmington, NC is a popular seaside city that offers beautiful beaches and nostalgic river front downtown, Wilmington attracts homebuyers from around the country, and the world.

Home prices in Wilmington vary greatly based on location, community and the proximity to the water.

One of the areas hardest hit by the real estate collapse was downtown Wilmington. A major employer, PPD, gambled and built their world headquarters downtown. This is a truly stunning building on the riverfront, however additional development by other companies and business did not come to fruition.

Planned hotels and condo high rises did not materialize. Condos and homes were built in excess, and as result many foreclosures ensued.

The past 18 months are showing signs of life downtown. While always beautiful and fun to visit (it has some amazing restaurants and shopping), downtown is beginning to see younger buyers infiltrate the market, in addition to those buying second homes.

According to the Wilmington Association of REALTORS, from August 2010 to August 2011, sales in Wilmington have increased 13%.

Rick Sharga, executive vice president with Carrington Mortgage Holdings, says the housing market is in a “catfish recovery,” with the market hitting bottom this year but prices mostly remaining flat until 2014.

Established communities like Forest Hills and Glen Meade were not as affected as much as these are much more established neighborhoods, and are also located close to the hospital and medical parks, which serve as a staple of community employment.

Lower priced condos and starter homes near UNCW also fared well, as the university has a constant flow of new students, faculty and support staff. Condos near the university in the $60,000 - $120,000 range remain attractive investments.

Landfall Country Club, a popular gate community, has seen its share of foreclosures. Many “spec” homes were built in Landfall, and as a result of excess inventory and pricing declines, some of these have been foreclosed on.