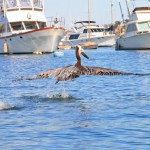 Often considered one of the most exclusive and priciest neighborhoods in the country, Newport Beach, California, despite suffering setbacks caused by the global recession and the national subprime mortgage housing crisis, still claims that title. Coldwell Banker's annual price comparison index still finds Newport Beach home prices as some of the top 10 highest in the country, even if prices have dropped both here and nationwide (http://www.laobserved.com/biz/2009/09/homes_pricey_and_che.php).

The Newport Beach real estate market has not suffered as badly as many areas of the nation, mostly due to the fact that the only residents who can afford to buy homes here are high-net-worth individuals, but this exclusive area has not been immune to the foreclosure wave sweeping the nation. Figures from September 2009 show that there were more than 830 homes for sale in Newport Beach, with a median price of nearly $1.5 million, a figure that has remained steady since August. There were also more than 300 foreclosures with a median selling price of just over $929,000.

Though prices here are still high compared with national averages, the prices are lower than they have been in recent years, which has been attracting new buyers who might not have been able to afford such homes a few years ago to real estate in Newport Beach. One estimate says home values have fallen around 20 percent from their peak values, which came in 2006.  Many buyers are also spurred on by the $8,000 government tax rebate for first-time buyers, and some are looking to take advantage of finding investments in the Newport Beach area, expecting the prices will eventually rebound.

August 2009 figures showed median prices in Newport Beach ranging from $832,000 to $4.3 million, depending on Zip code. Regardless of the area though, all average prices are down from the previous year. The area in Newport Beach with a median home sales price of $1.15 million is down from 2008 by just 7.8 percent, but the region of the city with median sales prices at $4.3 million has found its prices slashed, falling by more than 100 percent since the same time last year. (http://www.dqnews.com/Charts/Monthly-Charts/OC-Register-Charts/ZIPOCR.aspx)