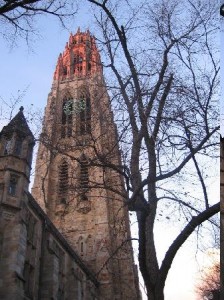 The Wall Street Journal's “Developments” blog section deals regularly with real estate market across the country. This particular online issue of the Wall Street Journal Blog, written by Nick Tirimaos, listed the New Haven real estate market as one of the few places in the United States where buyers are paying more than the asking price for houses and condominiums. The article, which was published on July 24, 2009, seems to indicate that New Haven is something of a port in the nationwide storm of sub prime mortgages, defaulted loans, unemployment, and poor housing sales. The compiled statistics, reported by the California company RealtyTrac, found that in New Haven, Connecticut, houses were selling for 7.3 percent above asking price, a stark contrast to the rest of the country.

The New Haven Register published an article on July 3, 2009 regarding the so-called “ROOF” project, which is aiming to reduce rates of foreclosure in New Haven real estate. According to the piece, written by Elizabeth Benton, the program manager, Eva Heintzelman, said that “Single family homes seem to have been particularly hard hit and aren't moving. The investors in the market aren't as interested in single-family homes because they don't have an income stream.” Meanwhile, the Connecticut Post found that rental properties are being  increasingly affected by the falling fortunes of real estate, while the New Haven Register also reported that foreclosures are driving a wave of homelessness.