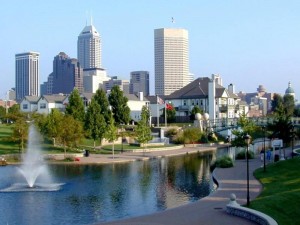 The Indiana real estate market is in the midst of something of an odd situation, thanks to a number of contradictory signals in different indicators. Indiana was heavily affected by the nationwide recession, especially in terms of foreclosure rates and dropping home sales, illustrating the weakness of the Midwestern United States economy. The overall Indiana market is quite heavily reliant upon the strength of Indianapolis real estate market, the largest city and state capital, although there are certainly a number of other communities and regions that are essential to calculating the health of the market. The difficulty in assessing the well being of the Indiana real estate market comes in the artificial inflation of home sale figures by short sales and foreclosures, which decrease sale prices but increase number of sales.

The foreclosure situation in Indiana is among the worst in the nation, although it was affected much later during the recession than most of the rest of the country. It jumped by double digits in the month of June, as mentioned by an online article by WCSI Local News. The piece went on to say that “Indiana foreclosures jumped 12 percent last month to their highest level in nine months. Legislators are hoping some new laws on foreclosures reverse that trend. As of July 1, state law bans prepayment penalties on adjustable rate mortgages, to make sure people who want to get out of a bad loan can do so.”

A July 22, 2009 article in the Courier-Journal described a second law enacted by the Idiana state legislature to prevent foreclosures and boost the Indiana real estate market. It said that “Lenders are now required to send Indiana homeowners at least 30 days notice before filing a foreclosure and must discuss options to avoid the action, if the borrower requests it, under a state law that took effect this month.” WSBT 2, a local news station, ran a story with the title “Indiana Hopes New Prevention Program Will Help Stem The Tide of Home Foreclosures.” The Indy Star reported on July 24 that a number of new buyers entered the real estate market in June, pointing towards a possible recovery.