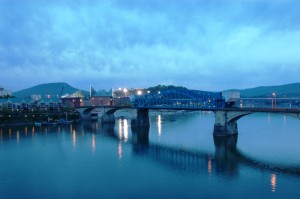 As so many other markets nationwide, the Chattanooga real estate market has suffered in recent years. The area has seen home sales prices fall 2.2% over the past five years, though this figure is much less than many of the other harder-hit market sin the country. In October 2009, according to data available on Yahoo, there were 2,687 homes for sale in Chattanooga with a median price of $144,000, an increase in price of 2.9% since September. Additionally, there were just under 450 foreclosed homes for sale in Chattanooga at a median price of $78,000, a 0.1% fall in price from September, and one new home.

But some local realtors maintain the market slump is simply that -- a slump that will soon pass. “After 50 years, I’ve been through several slowdowns, and in my opinion this has not affected us in Chattanooga as much as the one did in the late 1970s and early ’80s when Jimmy Carter was president,” Elgin Smith of Prudential RealtyCenter told the Chattanooga Times Free Press, noting that in those times, interest rates were up to 17 percent, versus less than 5 percent now.

Though the area's employment sector has suffered like so many around the country, it has been lifted with the impending opening of a new Volkswagen plant in the town, which will bring with it economic benefits and more jobs. According to the Times Free Press, a University of Tennessee study estimated the plant and its spin-offs would create nearly 12,000 jobs in the region, effects that will undoubtedly be a boon to the local real estate market.

According to Trulia.com, a real estate search provider, the average listing price for real estate in Chattanooga was just over $236,000, with the median sales price at over $112,000. Though there were 254 sales in September, that figure represented a more than 76% decline in sales from the year prior.